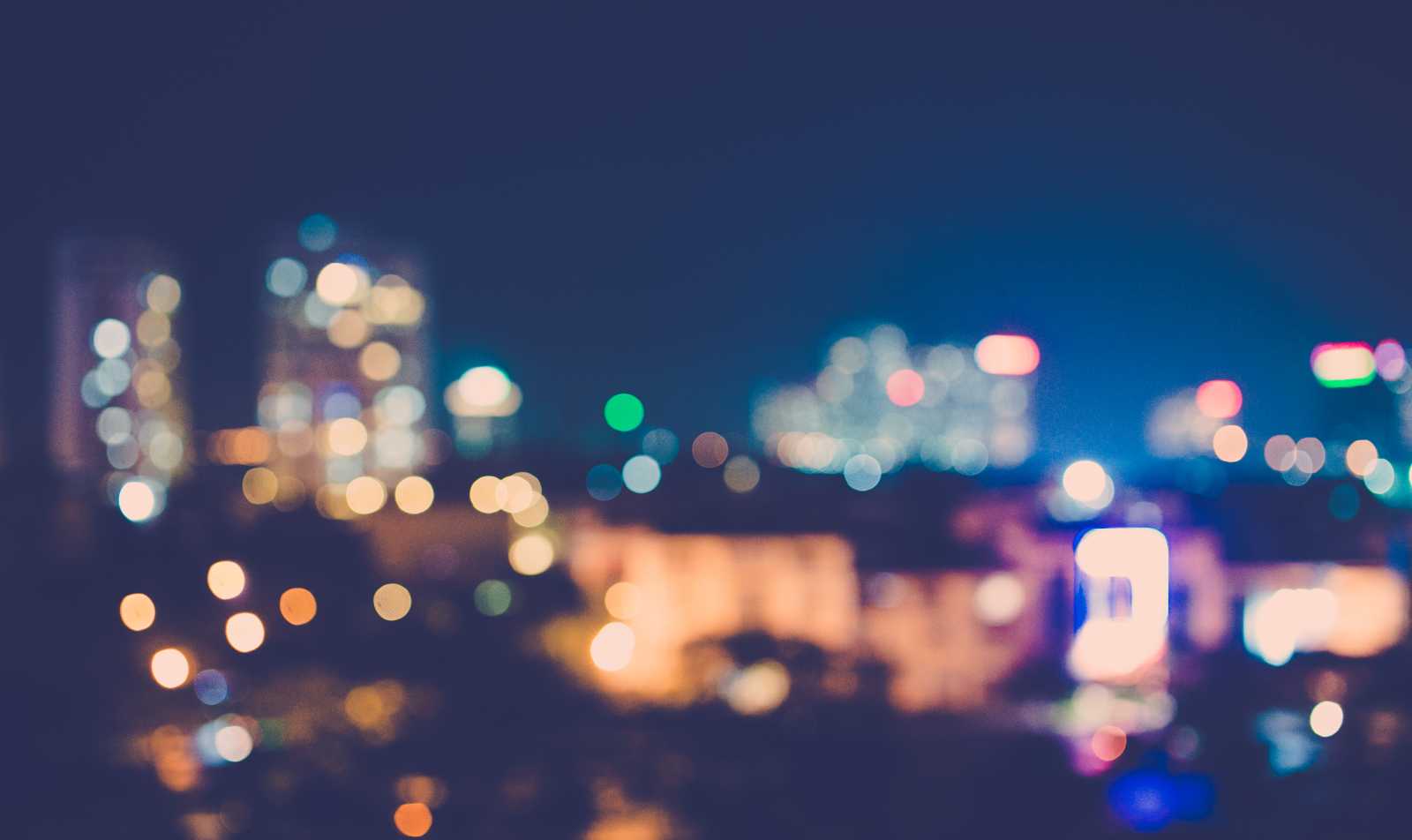 When people discuss the limitations of life in prison, they often focus on physical confinement—being held within cold brick walls and a heavily-fortified and fenced perimeter. The economic impacts of being incarcerated, however, are often overlooked. Prisoners often earn well under minimum wage, are forced to rely on monetary support from family and friends, and are in irreversible financial ruin upon their release. These crippling economic impacts manifest clearly at the prison commissary itself.

The prison commissary or canteen is a store within a prison where inmates can purchase basic needs items such as foods and hygiene products. Commissary store lists can showcase the control of the operators in choosing to stock certain items more than others. A thorough examination of yearly commissary receipts reveals not only purchasing patterns for inmates but a lack of sufficient quantities of certain goods.

Every state manages their commissaries differently, with varying degrees of privatization. This article will focus on three states – Illinois, Washington, and Massachusetts – with management systems across this spectrum. Price controlling and gouging is common in commissaries; as the sole supplier of many goods to prisoners, canteens operate as monopolies, so the operators, whether the state or a corporation, often have little to no regulations on price fixing. Subsequently, prison economies have very different compositions of popular items as compared to the regular United States economy.

Ramen, coffee, and mail-related supplies – three of the most popular goods in canteens – provide case studies for examining the abnormalities of these systems. The characteristics of these three goods reveal the unexpectedness of the prison market and emphasize the systemic flaws in prison economies.

As suggested by popular TV shows such as “Orange is the New Black,” ramen is one of the most popular items in prison commissaries and one of the most-traded items in informal prison economies. Sale revenue for a single flavor of ramen can reach several hundreds of thousands of dollars. The difference in ramen sales between Massachusetts and Washington can partially be attributed to the status of the commissary operator; prison canteens in Washington are controlled by the state’s Department of Corrections, while a private contractor, Keefe Commissary Network, runs the commissaries in Massachusetts. These different operators have different preferences and have set their own price designations.

For example, shrimp ramen sales in Massachusetts may have been so low because only one variant was sold – a three-ounce Maruchan Cajun Shrimp Ramen. Keefe labeled this variant as “discontinued,” suggesting that it likely was not restocked throughout the year. Washington shrimp sales are much higher because shrimp flavors were offered in different package sizes, even at a lower price of $0.25 per unit compared to Massuchusetts’ $0.40 per unit.

Not only are there disparities across state prison systems, but also between the price of a pack of ramen in prison and its typical retail price. Ramen can be found for as low as $0.13 to $0.17 per single package in some non-prison markets, but corporations like Keefe use their monopoly to gouge prices. Regardless of the administrator of the commissary, ramen for inmates is significantly more expensive than it is for a typical U.S. consumer.

Mail and stationary, such as envelopes, pens, and pencils, are also among the more popular items on prison commissary budget sheets. Inmates often have little or no access to cell phones or the Internet, so one of the only ways in which they can communicate with loved ones or ask for financial support is through letter-writing. Consequently, the mailing system is instrumental in connecting an inmate to the outside world.

The graph above reflects per capita sales of mail-related supplies. The large discrepancy between states is due to the differences in privately- and publicly-operated canteens. Washington’s and Illinois’ commissaries are directly overseen by their respective Departments of Corrections, while Massachusetts’ is overseen by Keefe, a private corporation. While the publicly-run commissaries in Washington and Illinois provided a much larger quantity and variety of envelopes to choose from, Keefe was able to stock and sell fewer envelopes in Massachusetts prisons.

This small number of envelopes purchased per capita (5.5 envelopes per inmate) evidences a major flaw in the commissary system. Allocating all vending power to one entity, especially a private corporation, is essentially granting that company a monopoly – complete control over a prison’s supply of goods and the ability to provide a limited number of items to inmates. Even in states which manage their own commissaries, a store’s goods come from a variety of commercial suppliers; there is a level of privatization in every single prison commissary in the United States. This poses a potential ethical concern to the commissary system in general: companies can dictate a prisoner’s already-scarce access to resources. 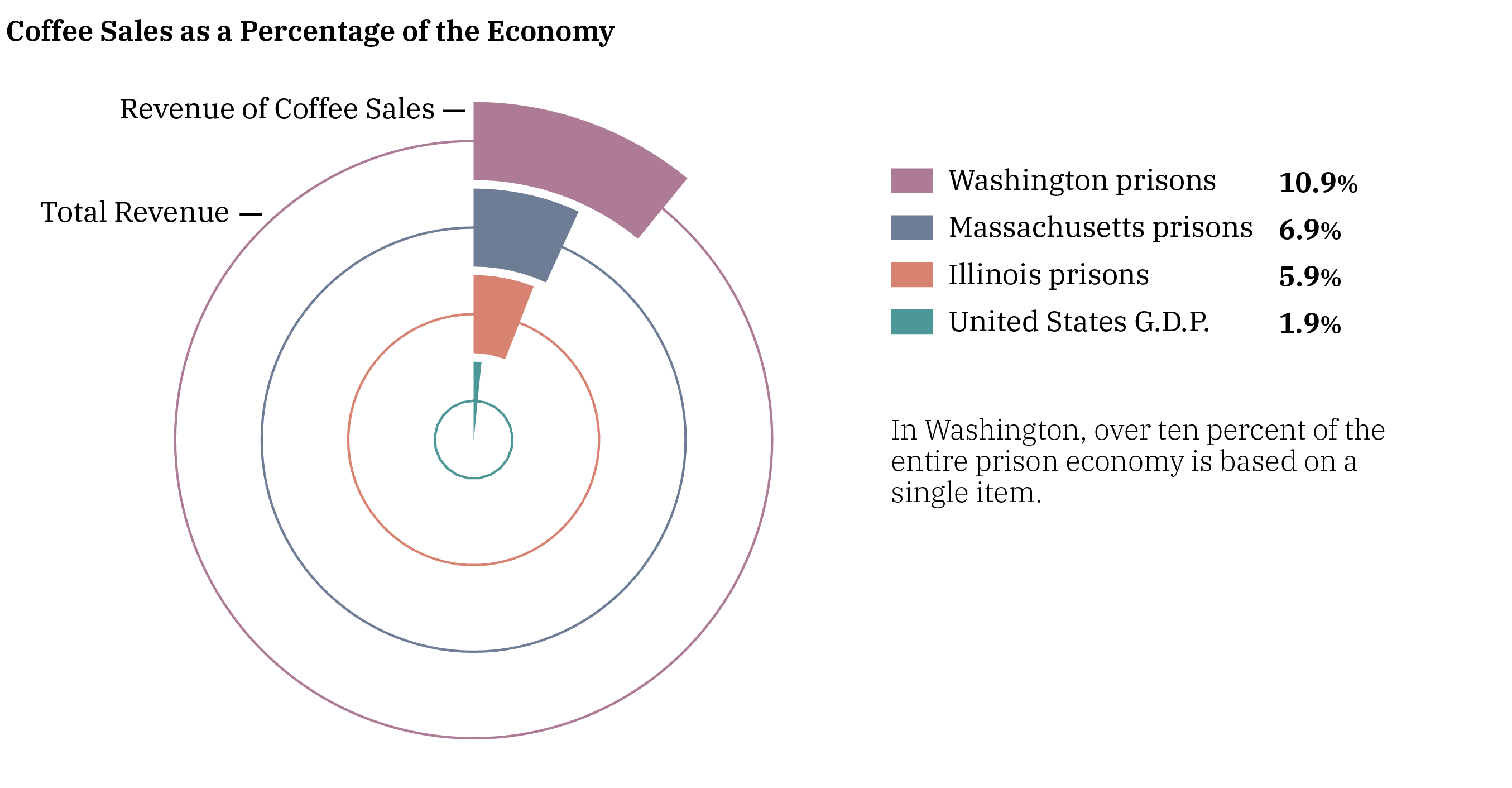 If ramen is the king of food in prison economies, then coffee rules the beverage market. As the sole stimulating drug legally available to inmates, coffee is wildly popular in prisons across the nation. This chart shows just how much influence the sale of coffee has in prison economies by comparing the share of revenue from coffee sales in prison canteens to the entire United States’ gross domestic product (GDP).

Looking at the percentages for the state prisons alone, these numbers might not seem significant – after all, coffee controls nowhere near a majority, a third, or even a quarter of the total market. However, when compared directly with the influence of coffee in the United States’ national economy, these numbers are staggering. The 1.6% share of the U.S. GDP comes from all facets of the coffee industry, including production, marketing, transportation, and supplemental products such as creamers and sweeteners – not just sales.

This comparison raises concerns about the composition of prison economies. In Washington, for example, over ten percent of the entire prison economy is based on a single item. This heavy reliance on one good can lead to instability, which could dissuade companies from supplying products. The monopolistic nature of prison commissaries means that if an item becomes unavailable in the commissary, prisoners may not be able to obtain the basic goods they need.

The current commissary system in prisons is flawed. Rampant price fixing and price gouging by companies’ virtual monopolies over canteens puts stress on prisoners’ and their families’ livelihoods. Private corporations like Keefe often wield an unethical amount of decision-making power, while the state rarely does a sufficient job of stocking the most important items in adequate amounts. Overwhelmingly-skewed shares of a few items in the prison market means that sales are unreliable and hard to predict. To sum, the prison commissary system needs to be thoroughly examined and thoughtfully reformed so that inmates can have stable, fair, and affordable access to essential resources.